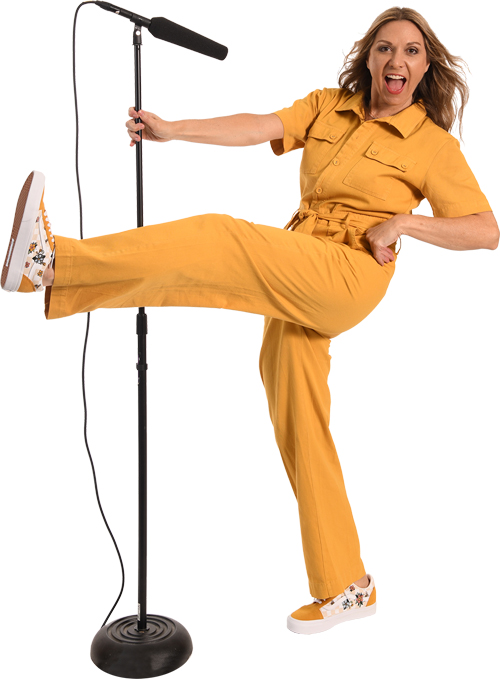 Heather began performing in front of her parents, grandparents, doting aunts and uncles, neighbors, anyone who would sit still long enough for her to belt out her latest, favorite song- all while either roller skating or pantomiming the words in some sort of dramatic modern dance. The real actors were the family and friends who did not openly laugh at these early performances.

She was always in trouble for talking, whether for telling jokes, being loud or dramatically whispering. Heather didn’t find out until much later that her attention seeking ways were not always a bad thing. To paraphrase Jessica Rabbit, “She’s just drawn that way.” and now gets to talk for a living!

When Heather’s family moved to Houston from Kansas City she found herself alone during the days while her husband was at work and her kids were at school. Heather started attending a popular on-camera acting class, inadvertently found voice over and she was hooked.

Some projects need a sweet, clear voice and others require something with a little more gravitas. Heather is definitely falls into that second category -a Merlot in a field of Chardonnays and White Zinfandels.

Performing is Heather’s passion and she believes that all voice over is about performing-finding a way to communicate and tell the story. If the story is important to you it’s important to Heather. She feels blessed to be able to make performing through voiceovers her life’s work by being your voice for hire.

Heather also believes that we never stop learning and in this brave new world of high-tech digitalization, it is more important than ever to stay in front of the learning curve, while never forgetting to make that connection.

Her customer service is top notch! Heather knows that many times when buying a voiceover, it is often the last piece of the puzzle, so you can expect fast delivery-most projects are delivered within 24 hours. She is located in the U.S. Central Time Zone.

Heather has voiced hundreds of in-house projects for national brands and television and radio commercials in larger regional markets such as Houston and Seattle. She is the Promo voice for Cloudfest the World’s Number One Cloud Conference. She has been the voice of Facebook apps with millions of views and YouTube videos for mom and pop stores in small towns. Heather has voiced hundreds of telephony or IVR/On hold messages. Folks seem to like her voice on their phone systems and she loves doing them! 🙂 Heather was honored to be a finalist in both 2017 and 202o in the SOVAS Audition Spotlight, That’s VoiceOver national promo competition.