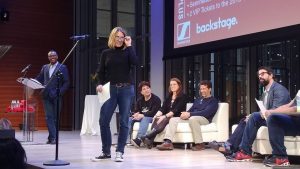 That’s Voiceover is an annual Expo brought to us by VO’s philanthropic, power couple Rudy Gaskins and Joan Baker.  These two have been a guiding force in the voice over community, reminding us to be inclusive and giving in all aspects of our lives. For this Expo, they put together some of the biggest names, both in front and behind the mic. Voiceover actors, talent agents, producers, branding experts, etc.,  all on stage to share their knowledge with us. Each year, they have what is called the Audition Spotlight. 2017’s contest the winner was to receive representation with TGMD Talent agency, a Sennheiser MK8 mic, two tickets to next year’s Voice Arts awards show, a promo spot for PIX 11 News in NYC and a chance to be SEEN by these industry giants.

When I saw the facebook post about the That’s Voiceover Audition Spotlight,  I thought, “ its time to get out of my comfort zone and put myself out there to be judged”. I had been working with my wonderful promo coach Joyce Castellanos for a few months and was eager to put her great direction and knowledge to work. So, I read the instructions carefully, including the part about auditioning in front of a panel of judges AND a live audience in NYC. Yikes!…. Deep breath, ok, I’ll do it.

After submitting my audition, I never expected to hear anything back except the standard “thank you for submitting” form email. You can imagine my surprise when I received an email from Rudy letting me know that out of 515 applicants, I had made it to the next round of 30! It looks like I was going to NYC’s Times Square!

Once again, as in LA, it was a blast seeing friends in the business and meeting new people.  The day was so exciting, and informative. There were panels on Radio Imaging, What Producers Want, Microphone Technique, Branding and much more!

After lunch, we were told for this next round we were going to audition privately and we would be notified when and where to go.  There were so many extremely talented people waiting to audition that I was just happy to be in their company. When it was my turn to go, a production assistant led me behind a curtain to the first panel of judges. They were: the last two years winners’ Tim Friedlander and Stephanie Thomas, renowned vocal coach Dave Walsh and …..Nancy Cartwright!!! (a/k/a Bart Simpson!!) I had to get it together and fast!  I read my heart out, was given direction, I read a second time, they thanked me and I left.  I thought “Well, I’m done! Stick a fork in me”-my inner fan girl was doing cartwheels for Cartwright. Wow, what an experience.

I went back to my seat to watch the next panel “Million Dollar Voices”.

I was so engrossed with the experts on the stage that when they were finished and Joan said “now was the moment we were all waiting for”, my stomach hit the floor. I had completely forgotten that this competition was not over. As she began to read off 6 names, my dear friend, Jean Francois Donaldson was seated next to me and all I wanted at that point was for his name to be called. He is such a good person and an incredibly talented VO artist. When Joan called his name I squeezed his arm and had to put my hand over my mouth to keep from screaming (we had been told to hold our applause until all finalists were called) Then she read the 6th and last name…”Heather Foster!” What ?????? No way!!! I had made it to the final 6 and was going to read live in front of my heroes!!!

We were ushered behind stage and each of us were given a mentor from the million dollar voice panel. I was assigned the beautiful and ridiculously talented Sylvia Villagran.  She was so supportive and gave me excellent direction. In what seems like seconds, we were being ushered on stage to begin the live audition in front of a new panel of judges and an audience of hundreds of people.

I wish I could give you an accurate account of what happened after that. I can’t.  I do remember every single one of the other contestants were fantastic. I remember thinking each one of them would have worked perfectly in that spot.  I vaguely remember managing to walk to the mic, saying my name and performing. Then, judge and VO legend Pat Fraley gave me direction. I read again. Take 2. That’s pretty much all I remember.

I didn’t win the That’s Voiceover Audition Spotlight. and neither did my friend Jean Francois.  A very talented lady named Jessica Rothertdeservedly won.

My takeaway from this experience: I believed in myself and put myself out there to be seen. When I was nervous, I kept going. I listened and took the direction that was given. I refused to buckle under the pressure and was authentic under one of the most inauthentic circumstances. Grace under pressure? Well, I don’t know about that. The goal was to get out of my comfort zone -mission accomplished and I was pleasantly surprised.

And yes, that IS the Ameritrade Dude,  Jim Conroy, sitting behind me. 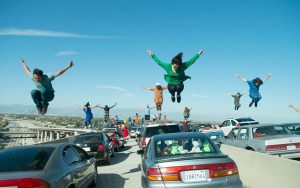 Voiceover can be such an isolating profession. Today, most of us have home studios and can spend long hours alone in a very small space…. Sometimes, I get a little stir crazy and need human contact!

I am also a believer in continuing education, in any profession. I’m like a shark, I need to keep movin’.  So when the chance came to meet some of my VO friends in person and hob nob with VO legends in the industry, I jumped at the chance!

So, this Fall, I went to LA for Randy Thomas’ VO Mastery conference! Randy Thomas, is a groundbreaking voiceover artist and currently the voice of the Oscars.  Each year, she puts on an amazing event where you can meet industry legends, mingle with casting directors, agents, the best voice over coaches in the business, get practical information on how to improve your craft, products that contribute not only to vocal health, but bank account health as well!

Well, right before I got off the plane, I wondered if it would be weird, I mean, after all, I barely knew these people. Many of my “friends” I had only seen pictures of on Facebook and others I had previously met via Skype or Zoom sessions. I’m happy to report that as soon as we saw each other, the bonds that had formed were real. It was so wonderful to meet these people face to face.

During the whirlwind weekend, there were panel discussions with agents, animation actors, vocal coaches, representatives from demo players companies, website builders, business advisers, vocal health experts..whew! They were all very informative-I didn’t leave a single one of these sessions without a serious “Ah Ha” moment! My only complaint is that they were too short.

However, the thrill of the weekend were the 2 small group Promo workshops I attended.  I was able to get in the recording booth and read in front of Joe Cipriano and David Kaye. At first, I admit, I was super intimidated  -I mean come on, these are two of the biggest names in VO.  They make it look and sound effortless! As we began to work, I forgot to be nervous and realized that this was where my heart and soul belongs. Their instruction changed how I view and approach voiceover, and I am grateful for opportunity to have been in the same room with them.

While some folks may bemoan the advent of social media, I have found it to be a lifesaver-not only have I been able to make business contacts that have propelled my business but I have made real, true friends.

However, my biggest takeaway from the VO Mastery experience is that all of these folks, some with decades of experience, love this business as much as I do. Yes, there is oodles of talent involved, but it’s also about passion and lots and lots and lots of hard work.

For more information about this fantastic conference visit http://randythomaspresents.com

New Year, New Website. Ok, I know, I know, it’s already March but I will still write checks (who writes checks???) with 2017 as the year until about June. So….

I like to communicate. I like to read, write, sing, dance and TALK. I find how humans communicate endlessly fascinating. The more effective we are with how we communicate the more successful we can be-no matter the endeavor. Many times when people want to hire a voice over for a website video or for an outgoing message, etc., they might think they want someone that sounds like Morgan Freeman or Meryl Streep when what they really mean,  most of the time, is someone who is a wonderful communicator . Someone who has the ability to get to the heart of the matter. Now, I’m not comparing myself to Freeman or Streep (Yikes!)  but I do consider myself an actor. My goal with each and every voiceover job I record is to make a CONNECTION, and to find the nuisance of the story-No matter if I am playing a character for a video game or recording an explainer video about new tires (yup, I’ve done that) AUTHENTICALLY connecting is the name of the game.

Perhaps you need an outgoing message that is friendly and attractive, but still knowledgeable. Maybe you need someone who sounds professional and mature for an explainer video. Whatever the essence of your message is, you need someone who will take the time to listen to you and then convey that message to your clients.

I realize that most of you are waaay too busy to actually read blogs. You are probably just looking to purchase a voiceover and want to know if I am right for the job. You have probably already gone to my demos and listened. Feel free to look around, listen to my demos, check out some of my recent videos and come back often!

Please contact me if you have any questions about how to hire a voiceover (even if I am not right for your current project). I can help! -or if you just want to say hello, I’d love to hear from you!