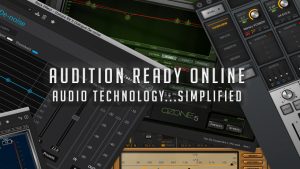 Are your auditions ready?

There is so much to know in voice over. You need to be able to understand what the script is asking of you, then perform it perfectly (usually all alone) in a small enclosure. But that’s not all. You also need to be a marketing genius, be a master at Facebook, Twitter and Instagram and lastly: your own audio engineer.  You have to have your own, professional voiceover studio and, at the very least, know how to record, edit and process your own audio files.

What if I told you that the audio side could (and is) be the easiest part?

Are you a voice over talent struggling to get hired? Are you putting in tons and tons and tons of auditions on websites like Voice 123 and Bodalgo, etc., (aka Pay to Plays or P2Ps) and getting nowhere? Have you reached out to agents and heard nothing but silence?

I feel your pain. I’ve been in exactly this spot! As a brand new voiceover artist, I was struggling. I was putting all these auditions to …crickets.  It was so frustrating!

I got Audition Ready.

I’ve been told by people who cast voiceovers that a huge amount of all auditions sent in from people with home studios have subpar (read: awful) audio.  And by raising your audio game, you could potentially put yourself into the top 10% of auditions heard. I know that in the beginning, I was blissfully ignorant. I was just happy that I had figured out how to plug my mic and interface into my computer and hit record. That was short lived, as I quickly realized that I didn’t sound like the professionals. Something was “off” but I couldn’t figure out what. I didn’t have the same quality, but I had no idea why. At the time, I was recording in an acoustically treated closet using a Rode NT1A mic and a Scarlett 2i2 interface. I used Audacity as my recording and editing software. While my quality wasn’t awful (I’ve heard worse) I knew enough to know that I didn’t sound like the other voiceover actors that I listened to. I wanted to sound like the big guns! Btw, there is nothing wrong with this set up. I just needed to adjust a few things.

Maybe you already know there is a problem and don’t know how to fix it or maybe you are like me and unaware of the audio issues that you may have. You could hire someone to fix these issues and set things up for you. Lots of voiceover actors do this and have great results- as long as you don’t change your recording space, or your mic, or your interface, etc. Then you have to go through the whole process again.

Wouldn’t it be great to know how to do this yourself?

Voiceover is so competitive! When you send in an audition you need to do everything you can to stand out from the rest of the pack.  Of course, you should get great coaching. Check out my resource page for a list of some of the wonderful coaches I have worked with.  Voiceover coaching is paramount.  However, unless you live in LA or NY, you can have the best “read” in the world and be one of the most talented actors they’ve every heard  and if your audio quality isn’t up to snuff they will pass you by.  Clients today expect your home studio to be at professional levels. One of the most important things about performing great voiceovers is confidence!  The stress of feeling “audio insecure” is very real. Know that if you are feeling insecure, your voice will give you away Every Single Time.

Also, learning about the audio side of things is a huge time saver! One of the very first jobs I was hired for was a 7 hour audio book through the ACX www.acx.com for royalty share. Since it was an adventure novel, there were some loud, battle scenes as well as intimate, romantic scenes. I knew that I needed to make the audio somewhat even, but didn’t know how to do it. I looked for hours and hours all over the internet. I found some wonderful, but very technical advice. It was like some of these audio guys were trying to be confusing. Frustrated, I did what any person would have done in my situation: I hand compressed the entire book! Ha! I took me nearly a month to narrate and produce a book that would take me a few days, at most. Now, I can master giant audio files in matter of seconds.

I first saw Tim Tippets in one of those YouTube searches a little over 3 years ago. He was speaking to a room of voiceover actors about common audio issues like “boomy rooms” and sibilance. I was struck by how knowledgeable he was and how easy it was to understand what he was talking about. I also immediately respected how he, at no time, talked down to the people asking the questions. He answered the questions in a way that made perfect sense to me.  Right away, I looked him up and contacted him. Tim responded to my email within minutes and I signed up take his “Audition Ready” class.

During this time, Tim was offering this class one on one via Skype for $500. It consisted of 4 one hour classes. In these sessions, I was able to grasp the concept of audio mastering and how to apply it to my specific voiceprint. I learned how to make my voice “sparkle” while cutting out some of the less than perfect qualities (boxiness and some sibilance) 😉 The point was to understand how to make my auditions standout because of their audio excellence-to rise to the top 10% so that I would be heard by the client! Talk about a huge leg up.

Tim expected me to do my homework (he literally will give you quizzes and homework to do) and to take responsibility for my learning. He is a terrific teacher. I could tell how much he loves what he does. I never felt like he was just going through the motions.

He also encouraged me to play with it- “Sandboxing” is what he called it.  I have since learned how to add and master my VO to music beds and video. A skillset I highly recommend you get. It’s great to be able to offer this service to your clients.

Tim has an amazing ability to take complex information and present it to you in a real world, applicable way. Through use of graphics and animation, he has been able to ‘pull back the curtain’ so that anyone can understand it.  In fact, while I was watching the first module, which is free, my 10 year old daughter was walking by and stopped to watch for a few minutes. She said “oh cool, I get that.”

Tim is now offering the exact same class I took but in a video, e-learning format. You will have lifetime access so you can watch the videos over and over. On top if this, it is less expensive! At the time of this writing, he is offering the course for $197.00.

The fear has been removed and I am free to focus on my performances, which is why I became a voice over actor in the first place.

Here is a link to the free, first video: https://bit.ly/2Gyo0Ja